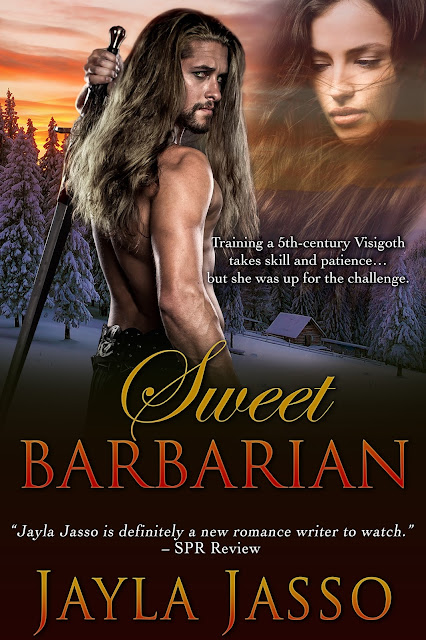 It's here! Thanks to my talented graphic artist Viola Estrella, the cover for my newest romance novel has all the elements I wanted - gorgeous Visigoth warrior with long wild hair front-and-center, beautiful half-Asian heroine over his shoulder, and her snowy mountain cabin in the background.

Valamir is a wounded 5th-century Visigoth warrior who's sent 1500 years forward in time by a Druid priestess in order to save his life, but at a price. She wants his love and loyalty forever, and makes him pledge it over a blood pact before transporting him to safety.

He ends up trudging down Pike's Peak in a snowstorm just a few days before Christmas in modern-day Green Mountain Falls, Colorado, and passes out in the back yard of high school teacher Karly's cabin in the woods. Her Chihuahua alerts her to a stranger's presence outside, and she finds him half-naked, bleeding from a wound, and in hypothermic shock in the snow.

Once his wounds have been tended and he's been revived, Karly discovers he doesn't speak English (or any other language she can identify,) so she sets about teaching him enough words that he can communicate to her who he is and where he came from.

When his story slowly comes out over the next couple of days, Karly fears her gorgeous, sweet house guest is either delusional or lying, but can't fight her attraction to him emotionally and physically long enough to take him to the police station or the mental ward.

Besides, with her control freak and cocaine addict of an ex-husband determined to harass and threaten her every chance he gets, it doesn't hurt to have a 6-foot-6 behemoth of a man around to beat some ass.

You can see all my Sweet Barbarian inspirations - Argis, Brock, the models for Karly and her brother and friends, her cabin, her wardrobe, and her dog - on my Pinterest board for the novel.

This novel was so much fun to write. I read Rachel Aaron's 2k to 10k: Writing Faster, Better, and More of What You Love in May, went on a healing vacation to Huntington Beach in early June, and started writing this novel on the airplane on the way there. I finished 3/4 of the first draft in two weeks based on Rachel's suggestions, waited to write the ending until the second draft, and finished the entire book in July. It's been in the various editing stages since then, now in the final edits with my editor Katriena Knights, and the release date is set at December 23rd, 2016. You can pre-order it now on Amazon.
Sweet Barbarian