Let Me Introduce You to My New Boyfriend, Val - It's Sweet Barbarian's Release Day! 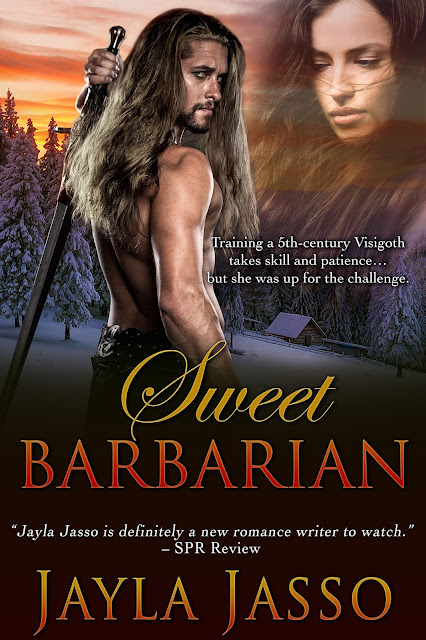 It's finally here - the day my new novel goes out into the world to seek its fortune. I imagine that it's sort of like sending your child off to his first day of kindergarten...will he be okay out there on his own? Will the teacher and the other kids like him? Will he come home excited because he had the time of his life, or crying and heartbroken?

This novel had almost 7 times more preorders than the last novel I released, and while it's been thrilling to watch those sales numbers grow steadily over the past few weeks, it also made me nervous. That's a lot of people who put their trust in me and my novel before it had ANY reviews, and before they could read any sample pages. Hoo boy. I hope my sweet barbarian delivers the goods!

So, speaking of my new hero, Val...I'm really kind of ga-ga over him at the moment. Here are his quick stats:

Last night the novel appeared, ready to download on my Kindle app, and I immediately opened it and started reading it just to get the experience of how it would look and feel for my readers. I read the first three chapters in one sitting, relieved to find that even though I wrote it and have edited the entire thing three times in the past 3 months...it still grabbed my attention and had me turning the pages to see what happened next. This novel is not as action-and-adventure heavy as Caribbean Jewel or Kiss of the Assassin (admittedly, both of those novels are extremely action-and-adventure heavy) so fans who are looking for swordfighting, narrow escapes, and complicated intrigues won't find as much of that here. There is a tiny bit of swordfighting as well as a couple of narrow escapes, but Sweet Barbarian is mostly dialog, most of it just between the two main characters Karly and Valamir, in the confines of her mountain cabin where they are snowed in for several days. I don't know if that sounds too exciting or not, but I'm relying on the fascination you'll hopefully have with Valamir's character, watching him navigate the strange new world that is Colorado in 2015 as well as his attraction to and feelings for his savior-hostess, Karly Draper.

My hope is that you, my readers, will live vicariously through Karly, leave behind the trials and tribulations of this life to escape into her world, enter her skin, and fall in love with Val as he falls in love with you. Isn't that why we read (and I write) romance novels???
Sweet Barbarian