I found this little gem sort of by accident—I was trying to visit a friend who lives in Puntarenas, not necessarily looking for a new vacation spot. I nabbed a 4-day deal with airfare and hotel (full breakfast included) for $852 just because it was among the first deals that popped up in a Travelocity search. What I found for that price was a quaint little undisturbed beach town on a mini-peninsula, sheltered in the basin of mountains, with everything I personally consider important for a relaxing warm-weather getaway from Colorado’s long winters.

Comparing the price of the trip to other popular Pacific-side beach locales, Puntarenas is anywhere from $200 - $500 cheaper, and it's a little less than a 2-hour drive from the San José airport, half the travel time to Tamarindo and 45 minutes less time than traveling to Manuel Antonio. I took an independently-owned taxi for $70 each way, but if I had planned things out a little better I probably could have gotten an airport shuttle bus for under $60 each way. (Uber was showing up on my app for about $63 each way, but the drivers apparently can't pick you up at the exit of the airport due to the taxi coalition (read: mob) that was stationed just outside the exit doors basically yelling in your face to take their taxi please.)


I didn't realize until I arrived that the hotel I randomly chose (and without much thought, actually) was right on the beach, separated from the sand only by a paved, not-overly-busy street. I didn't need to rent a rental car or to fuss with parking to enjoy the beach, the local shops, the "Paseo" (promenade,) or the restaurants nearby.


I thought the beach was perfect. Thanksgiving Week was definitely "slow season," so there was plenty of peace and tranquility to be had. Piles of driftwood dotting the beach here and there didn't detract from the pleasure of warm sands, blue skies, and flourishing palms.

In fact, I shot these photos of some beautiful driftwood specimens along the shore:


The sand there is dark volcanic rock, and soft and smooth as could be, unlike other beaches I've visited in Costa Rica. The waves hitting the shore were more subdued as well, so it made for easier wading. I didn't see any surfers here, so that might have accounted for the cheaper prices in terms of overall tourist attractions. But for me (a non-surfer) it was perfect.

The Paseo was a lovely line of little shops, houses, and cafés, painted in bright colors and mostly open-air so you could enjoy the ocean breezes from outside. It wasn't as hot as I remember Tamarindo and Manuel Antonio being when I visited those beaches.


The Paseo itself was well-designed, clean, shaded, and lovely. It was landscaped and well-maintained but not in a way that detracted from the overall natural beauty of the area.

I enjoyed walking along the sidewalks just taking in the local vibe, the beautiful vegetation, and the mixture of shabby beach town plus Spanish Colonial architecture. The whole place felt a little old fashioned, like I had stepped back in time a bit. Almost like playing Fallout 3 or 4 but with less post-nuclear trash and destruction. :)

I found "El Jorón" for lunch the first day, ordered an "Ensalada Verde," and received this enormous platter of crisp vegetable goodness:


I ditched the honey mustard dressing and opted for a drizzle of olive oil, a sprinkle of salt, and the juice squeezed from those orange-centered limes. They were a little sweeter than the limes we have here in the U.S., perfect for this salad.


I saw a few things on the menu that I thought would be ok options for vegans and vegetarians, but ended up ordering "Arroz Vegetariano" (Vegetarian Rice) and was soooooo glad I did. It was loaded with veggies, seasoned with garlic and achiote (annato seed,) and tasted very reminiscent of Spanish paella. I had it for lunch two days in a row, if that tells you anything.

They served the rice with french fries, which I thought was a little decadent (and starchy,) but then again, you're on vacation, so why not.

I scored some inexpensive local produce to eat in my room, both for financial as well as health reasons (I don't like to eat out every single meal when I travel.) I always pack my $5 Big Lots cutting board, a vegetable peeler, a plastic bowl, and my $1 Dollar Tree chef's knife in my checked baggage so I can cut up fruits and veggies to my heart's content.

All in all, it was a great, relaxing, stress-free trip. Costa Rica is a 5-ish hour flight from DFW, so even with a connecting flight I left Colorado Springs at 11:00am and arrived by 7pm (6pm Colorado time.) For under $900, heck yeah I'd go again. It was my own little slice of tropical tranquility. :) 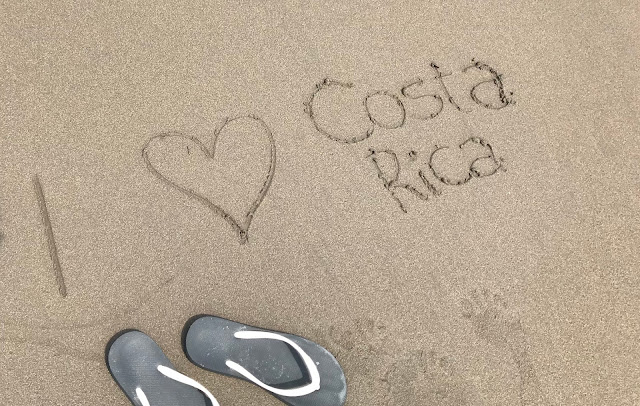